I'm of the opinion that homemade pumpkin puree is better than what comes out of a can. Some people disagree with me, but I argue that the delicate, sensitive flavor of pumpkin is easy to overwhelm. Simply put, if you overload it with sugar and/or that mixture of cinnamon, ginger, nutmeg, cloves and allspice called pumpkin spice, canned is going to taste identical (if not better).

Before you belabor the point of homemade versus canned, the same argument for overloading quality ingredients with sugar and spices can be made for coffee, tea, flour, steak, etc.

In any case, homemade pumpkin puree is really easy to make. At home, my wife and I use it as the base for all our pumpkin dishes.

First, get out your cutting board and french knife.

Cut the pumpkin in half. Don't worry about getting the halves perfectly equal, it doesn't matter. What does matter is being careful with your knife!

I start with the point of the knife, puncturing into the middle. Then I carefully slice around the whole pumpkin, keeping the point in the middle. It does take a little bit of effort, but so does carving a jack o-lantern. 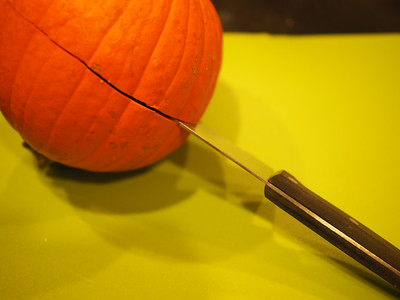 Once halved the pumpkin should look like the photo below. Note how the edges aren't perfect! 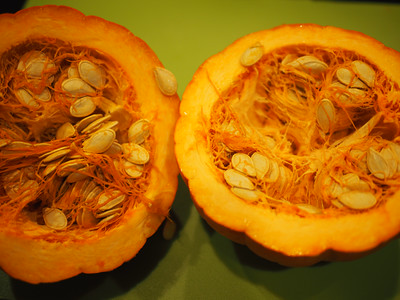 Set the over to 350 degrees fahrenheit, or about 176 degrees celsius. 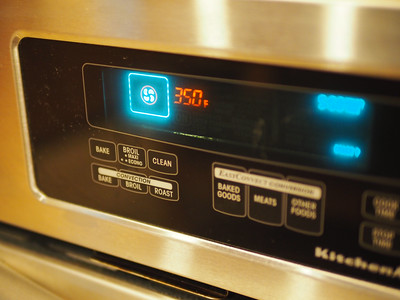 Scoop out the seeds into a mixing bowl. You can use a spoon or your hand. Don't worry about getting the stringy material out of the pumpkin. It's perfectly edible and provides a slightly stronger pumpkin flavor when you are done.

In a future recipe I'll describe how you can roast the seeds.

Spread the spoonful of olive oil on the parts of the halved pumpkin touched by the french knife. The goal is to not have the pumpkin stick to the cookie sheet while also not overwhelming the delicate flavor with olive oil. 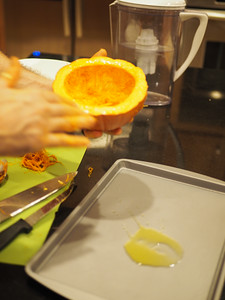 Put the pumpkin halves face down on the cookie sheet then place that in the oven. 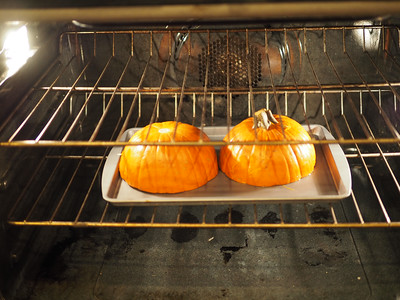 In about 45-60 minutes the pumpkins will be done. The skin of the pumpkin should be a little darker and perhaps take on mottling.

Wait about 5-10 minutes for the pumpkin to cool. Then peel off all the skin and throw it away. In the photo below you can see where I took the stem of the pumpkin and just pulled off the skin. The little hole in the pumpkin flesh itself is where we tested the flavor with a spoon (it was yummy).

Using a big spoon, scoop the cooked pumpkin into another mixing bowl. In this case, we dumped it right into the soup pot. It will fall apart in the process, but that's okay!

Puree the pumpkin! We prefer the immersion blender as it's less setup/cleanup than a food processer or blender. Not to mention you can do it right in the soup pot.

Use the puree in something yummy! Here we used homemade pumpkin puree, milk, chicken stock, and spices to make an healthy, savory pumpkin soup. It's been dressed with a dab of sour cream and roasted pumpkin seeds.

Yes, I'll be documenting our pumpkin soup recipe in a future blog post. 😃

Beginner's Guide to PyCon 2013 Part I